The Goose, the egg, and the rowboat 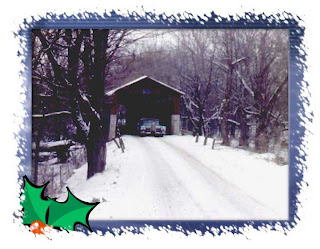 The Holidays are never easy, and this year it seems will be harder than usual. I thought about posting a Christmas gone by memory of Ron, but then decided instead to tell you about one summer on the Island, a goose egg, and a rowboat.

The Island, as we called it, was a small, wooded piece of land bordered on all sides by water with two roads in. One with a beautiful covered bridge (pictured) and one just a wood-lined road with a rather ordinary bridge. It was located in Xenia, Ohio, and was owned by our dad's best friend, Jack. It was a place of rivers and creeks, cabins and woods, and mischief for bored kids.

I can't really remember a time when we were kids that we didn't visit the Island. Winter found us sitting in Jack's lodge house, roasting marshmallows over the fire or stomping around in the snow and falling on our butts as we tried ice-skating on the river. Summer visits were filled with memories of playing "Shot in the Dark" or catching fireflies or just simply being lulled to sleep by the repetitive chirp of crickets and the deep, earthy croak of bullfrogs.

One summer, Ron and I were allowed to take the rowboat out on the river alone, no parental supervision. Wow! We had stern instructions to stay up near the lodge house or even farther up river, but not to go past the bridge, and to steer clear of the dam. "Sure, no problem," we said, all smiles and sweetness. And we meant it!

So, away we go, Ron rowing, because he said he knew how, which he really barely did, and me facing him, riding along. I envisioned a calm, leisurely ride, just a nice way to pass the afternoon.

We slowly worked our way against the current, taking in the way the old tree branches hung low on the bank, how fish gathered near the branches that had dipped beneath the water, and even admired the ducks and geese floating near our boat. Oh, so very picturesque.

Then, things changed. Geese and ducks aren't always friendly, and pleasant afternoon boat trips have a way of turning on you. One goose kept swimming near the side of the boat and honking at us. If that wasn't odd enough, at about the same time, we both noticed a small white ball floating in the water near the goose. We shooed the goose away and upon closer inspection, we decided it wasn't a ball, but neither of us could figure out exactly what it was.

I, ever the cautious one, said we should maybe just leave it alone. Ron, always the opposite, reached down and fished it out of the water. He held it up and smiled. It was a goose egg. And before I could say, "Okay, great, now you know, and hey how about we put it back," the water-soaked thing burst into a mess of yucky, slimy egg yolk and stink. Oh my, did it stink.

We had rotten goose egg innards all over the boat, all over Ron, everywhere, plus a very angry goose in the water next to us. And we were nowhere near the dock.

Ron started rowing, trying to outrun the smell – as if – and the goose! Then, because we were just a bit preoccupied by the smell and the goose, almost too late we realized we were heading toward the dam.

Screams rang out and operation "rowboat reverse" went into effect. I'm paddling by hand, Ron's rowing like a madman, the smell isn't going away, and neither is the angry goose. The other geese and ducks were looking at us like we were crazy, and if things weren't bad enough, there stood our dad yelling at us from the shore. He didn't look happy. Who knows what he was saying, we couldn't hear him through the noise of our laughter and the honking goose! I mean, what else was there to do but laugh? The whole situation was absurd!

Finally, we made shore, docked the boat, and just fell out on the grass and continued laughing until we had tears in our eyes. My dad rolled out a hose and, you guessed it, hosed us down. The laughter turned to shrieks as the spray hit us. Then, still dripping, we hosed out the rowboat while that crazy goose floated nearby, still honking, almost like it was scolding us. I rather believe it was.

So ended the adventure of the goose, the egg, and the rowboat.

I know it's one of those stories that you had to be there to appreciate the silliness, but things like that always seemed to happen to us. Just another day in the life of the Noe children.
Posted by Sheri at 12:14 PM 2 comments