I'm creating this thread with the hope that it will make it easier for others to post their memories...sort of a catch all.

If anyone has photos they wish to post, email me the photos and I'll post them for you!

Thanks, Sheri
Posted by Sheri at 8:58 AM 0 comments 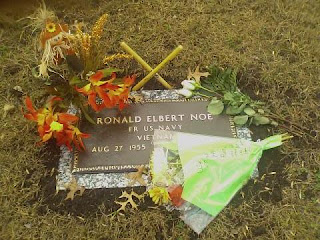 This is a photo of Ron's memory marker. I want to personally thank Tom Wiley for sending it to me.

To Tom, along with Jim, Steve, and Max, Ron's brothers, if not by blood, certainly by spirit and love, thank you. Through your thoughts and actions, Ron lives on.
Posted by Sheri at 8:20 AM 2 comments

The Crosswind—Ron Noe Memorial Scholarship is a scholarship made available to graduating students from Wamego High School who plan to continue their education in the arts, business, or technology fields.

The scholarship is awarded each year on March 15th. Applications are available within the Wamego High School guidance office. Criteria for the award will focus on areas that were of interest to Ron and how they relate to his love for music (Arts, Business, and Technology). Also influencing the award will be a candidate's efforts in helping grow or mentor others as Ron did with Crosswind President Tony Johnson.

Crosswind President Tony Johnson had the following to say about the scholarship. "In creating this scholarship, it provides an opportunity to continue what Ronnie did with so many, and allow that impact he had on people to continue. I remember when I was 15 years old and met
Ronnie, how he was a mentor to me in helping me grow and evolve.

"To this day, a lot of those lessons I learned from him and others while riding in the blue school bus, I still apply as we operate Crosswind with products sold in 41 countries. This scholarship will help young people who want to grow and develop, discover what the world has for them, a chance to do so."

A Note from Sheri:

What a wonderful way to honor Ron. Perhaps, in time, they will broaden this award to include students at Manhattan High, Ron's high school. I hope so. Thanks, Tony, for doing this.
Posted by Sheri at 6:54 AM 0 comments 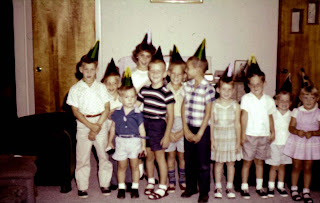 August 27th would have marked Ron's 53rd birthday if he had lived. As the date approaches, I find myself reflecting on many things, moments that only siblings can share: all the giggles, the smiles, our fears and tears and the fights -- Ron did so love to pick on me. I often thought it was a hobby of his or he considered it his brotherly duty. I usually broke out in tears, he usually got in trouble. But though we fought and argued, just let some other kid try to argue or fight with one of us and the other was right there, ready to do battle...the way of siblings: I can pick on my brother or sister all I want, but don't you dare.

Scenes from the neighborhoods of our youth flash in my mind, the kids we ran with, the long lazy days of summer and the fun of chasing lightning bugs and staying up late. Come fall, the smell of leaves burning filled the air and Halloween with its ghosts and goblins running door to door on Beggar's Night. Oh, how Ron hated to have to drag me along. There was lots to do, candy to be had, and little sisters did nothing but slow him down. [We used to carry extra bags with us because we got so much candy that we would drag the heavy bags on the ground...eventually the bags would break and we would have to stop and transfer all our loot to new bags.] And I remember the old house down the street from us when we lived in Oakwood. Not one of the neighborhood kids would walk past that old house, nope, not on your life, because it was haunted and every kid in the neighborhood knew it even if their parents didn't. And Halloween was a time to stay far away from any haunted house.

Winter brought snowmen and snow forts, and snowsuits so thick you could barely move and of course, Christmas! The spring rains washed away winter drabness and ushered in the joy of running outside without coats. Spring also brought Easter and flowers and the release of restlessness from being couped up all winter long.

Memories, thousands of them, all jumbled up and sleeping until something causes them to awake and haunt my thoughts. August 27th seems to wake them from their slumber.

Above is a picture of Ron's sixth birthday. It was taken in the house my dad built on Indian Ripple Road in Beavercreek, Ohio. The year is 1961. I can barely recall the kids in the picture...except Norm Jr., my cousin--He's next to Ron, Ron has his arm across Norm's shoulder, and of course me at the far right end. I vaguely recall the older girl in the back and the boy on the far left...neighborhood kids, siblings as well, but that's it. Yet for some reason I recall this birthday, the games we played, and those silly hats! It is a fond memory filled with pin-the-tail on the donkey, balloons, gifts, and, of course, cake and ice cream, giggles and laughter.

Happy birthday, Ron, wherever you may be.
Posted by Sheri at 8:26 PM 0 comments 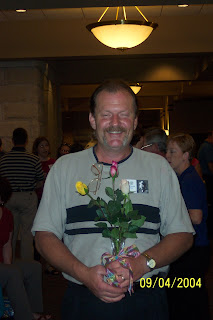 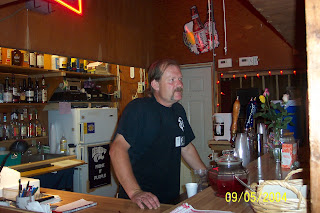 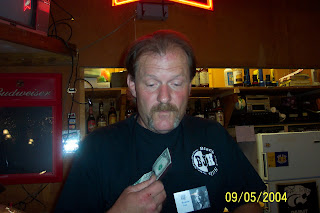 I received some great photos from a classmate of Ron's: Connie (Thompson) Visitacion, who right now is in England (lucky lady!). Connie can be reached at kanivisit @ gmail . com

(Close up the spaces.)

I was so happy when another classmate of Ron's, Rhonda McCabe, contacted me, then contacted Connie about sending the photos. Without either lady, I wouldn't have the pictures to share.

These 30th reunion photos were taken out at Black Jack Hills in St. George, KS, Ron's business.
Posted by Sheri at 10:51 AM 0 comments

Wallace and Ladmo, KRUX, and the Monkees!

The other day, I was watching some show, I can't even recall which one now, but someone made a reference to Wallace and Ladmo!

Wow, instant walk down memory lane.
Not just because Ron and I used to love to watch the Wallace and Ladmo Show, but the mere mention of the show made me think of the 60s, Phoenix, AZ, canals, KRUX-AM 1360 radio station, and the Monkeemobile!

A bit of history: For a time in the 60s, we lived in Phoenix, AZ. Our dad had bought a gas station there which he called Grover Noe's Texaco. It was really a family business, with our mom and uncle working there as well and sometimes a cousin or two. That left Ron and I with plenty of time on our hands after school, on weekends, and during the summer when we didn't have to go and hang out at the gas station. Now, don't get me wrong, we had a lot of fun hanging out at Grover Noe's Texaco, but we also really enjoyed days we got to stay home and run with the neighborhood kids.

One of the "in" things to do was explore the canals, and many times, swim in them. Now, first, we weren't supposed to, and second, the term swim is being used loosely here. What really happened was the older kids would toss us in the canal and the current would grab us and send us flying along where other older kids waited to fish us out! As I think back on those days, it makes the hair rise up on my arms, but we were kids, what did we know?

On one such adventurous day, we all decided to hike the canals and see if we could discover something interesting to do. We just never knew what might become entertainment.

There were maybe ten of us in all, though the only name I can recall was Candy, a girl in her teens, who played a mean tambourine in the band Ron was with (he was in grade school!). Ron had a BIG crush on her. I had a case of hero worship, I guess, as she was the first "older" girl that let me hang around with her, which was pretty cool! Anyway, we all followed the canal for a while and soon found ourselves out by the KRUX radio station.

And that's when things went a little crazy! We all spotted the Monkeemobile about the same time. Wow! The Monkees! OH MY GOSH!! They were right here, at our local radio station! The Monkees!

I recall just standing there with my mouth hanging open while Candy took off like a flash around the side of the building. Ron and the rest of us soon followed. As we rounded the corner, there was Candy trying to crawl through one of the station's window, bound and determined to get in and see Peter, Mike, Mickey, and Davy!

With Ron's help, she actually got boosted halfway through the window before some man came around the side and ran us off. Or I ran, at least. I'm a coward. I think the rest of them sort of trotted.

All the way home we whooped and hollered. Wow, the Monkees! Weren't we just the luckiest kids in the world! We talked (bragged) about seeing the Monkeemobile for days, and as I recall now, the story grew by leaps and bounds the more it was told. We all became the envy of our peers, at least for a while. Which for us, made us stars!
Posted by Sheri at 8:11 PM 15 comments